Last week I flew into MSP with a boxed up bike and a vague idea of what I was doing. I’ve ridden almost all the way across Wisconsin as of posting this today, and tomorrow I’ll start camping in Michigan’s Upper Peninsula as I follow Adventure Cycling’s Northern Lakes route.

Let me back up. I was supposed to do the Erie Canal with my dad this summer, but family obligations came up and we had to put that trip on the back burner for the time being. As I had just gotten all this new camping equipment for my birthday, I wasn’t about to pop the tent in the backyard for a staycation. Summer break was stretching out before me and I had to quickly find another trip before I fell into the trap of never ending house projects (which are rewarding, but not the same as a bike trip). I opted for a solo trek on the ACA North Lakes route instead since it offered cool weather, scenic country roads and the chance to see some people along the way that I owed a visit to, including family nearby that I could call in the event of some dire emergency.

So on Wednesday, I landed in the MSP airport and quickly discovered that Minneapolis is basically Disney world for people who like bikes. And 70 degree weather in the middle of June (coming from South Carolina, this feels like nothing short of a miracle). And while the North Lakes route and the incredible time I’ve had since heading out on Friday will be a story to tell, the twin cities deserve their own post as well.

I flew from Greenville to Minneapolis on Southwest, and opted to check the bike in a box for $75 so I could ride it straight out of the airport. It would have been comparable or more to ship it to a bike shop, Uber there, and pay for a build. While packing the bike at my local shop the day before took awhile (using no stand and a couple of tools I could bring to make sure I could reassemble it in the airport the next day), assembling at the airport was actually much easier than I anticipated. 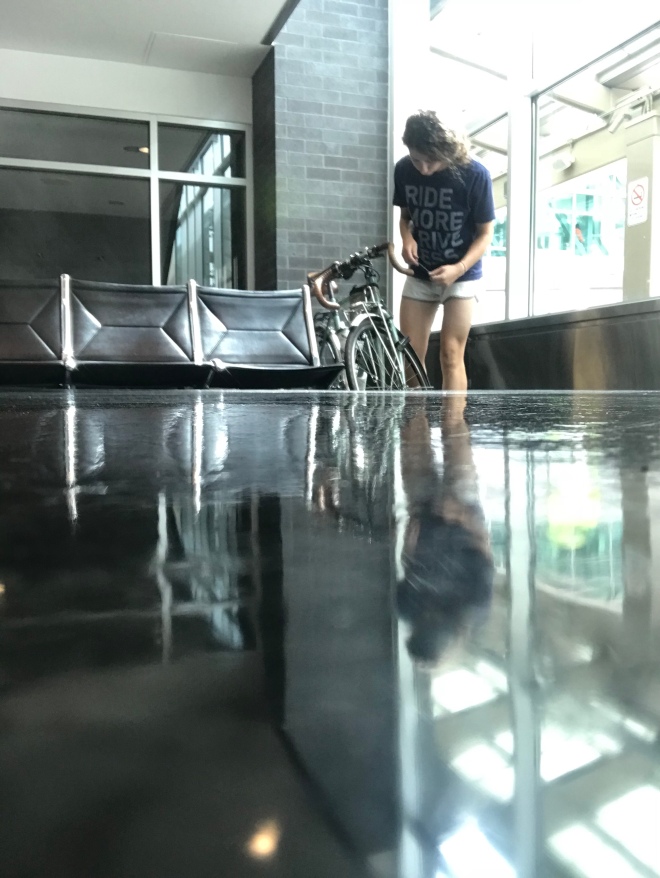 For my bike to fit in a 62″ long box, I had to remove the front wheel and fender, seat post, pedals and handlebars. The front rack was small enough to leave on and it fit perfectly in the box lengthwise. My shop gave me packing materials including hub caps for the front wheel, and the bike arrived safely in MSP with no issues.

I packed some soft items in with the bike, including my sleeping bag and helmet, but my panniers and tent I dropped into a duffel bag (actually a folding bike bag, non padded) and checked that for free, taking only the necessities in a foldup shopping bag as my carryon. I brought a prepared plastic mailer with a preprinted postage label for the folded duffel bag so I could drop it and any small extras into the mail to send to a friend near Detroit, where I’ll be flying out of in a couple of weeks. I also mailed myself some casual clothes and makeup for the end of my trip when I’ll be visiting friends and family, so that I could just bring along the supplies I needed while riding through Wisconsin and Michigan. Don’t be fooled by those Stamps.com podcast ads – if you have a PayPal account, printing USPS postage labels is easy and cheap.

The bike build took about 30 minutes, and repacking my panniers probably took just as long. An airport attendant came up and waited patiently for me to finish building and then offered to take the box away, which was a wonderful surprise because I had woken up in the middle of the night a few days before the trip wondering what one is supposed to do with the large empty box and packaging (pull it around with a fully loaded bike, looking for a dumpster? wait for it to get impounded?). The whole process couldn’t have been easier. Using google maps as a reference, I rolled right out of the airport from the terminal loop to East 70th Street.

Very shortly, I was in Fort Snelling State Park and enjoying verdant trails in 75 degree weather.

I took a couple of trails that paralleled highways to get over to a very fancy REI near the Mall of America where I could buy stove fuel, since I couldn’t bring it on the plane. The trails weren’t particularly scenic, but very functional and comfortable. 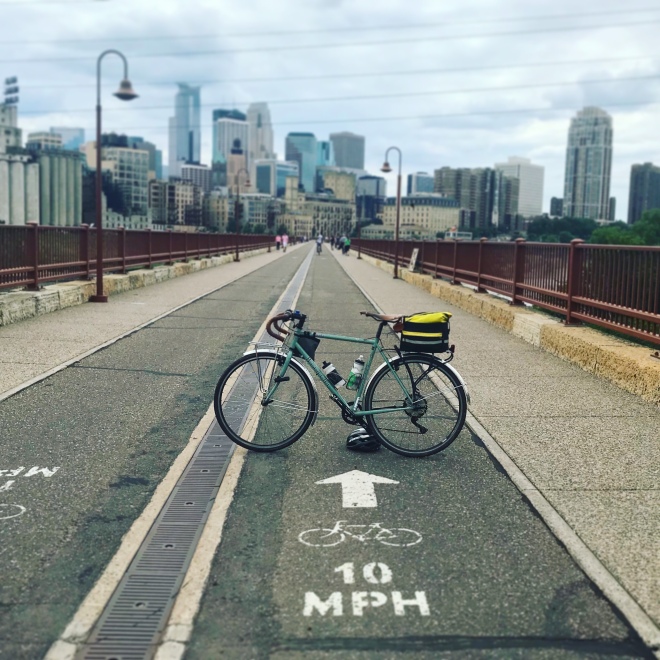 After I had run that errand and dropped off my bags off at my host’s house around 3pm, I ventured out to explore the city. There are many Warm Showers hosts in Minneapolis and I highly recommend checking out that network if you’re interested in bike touring, for reasons I’ll delve into in another post. 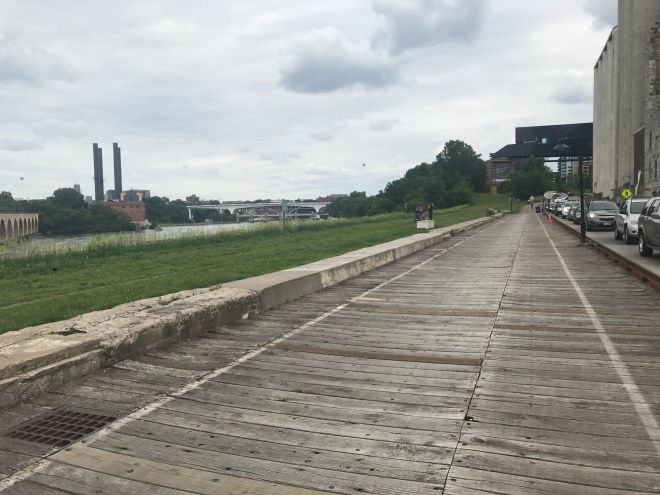 The trails in Minneapolis are mostly paved but this boardwalk section in the Flour Gold area was a neat feature. I just had time for a loop up the riverside trail and down Minnehaha Avenue before dinner, so I was glad I had allowed an extra day for city exploring.

Minnehaha falls is a lovely park and was my first stop the next morning on my Minneapolis loop. 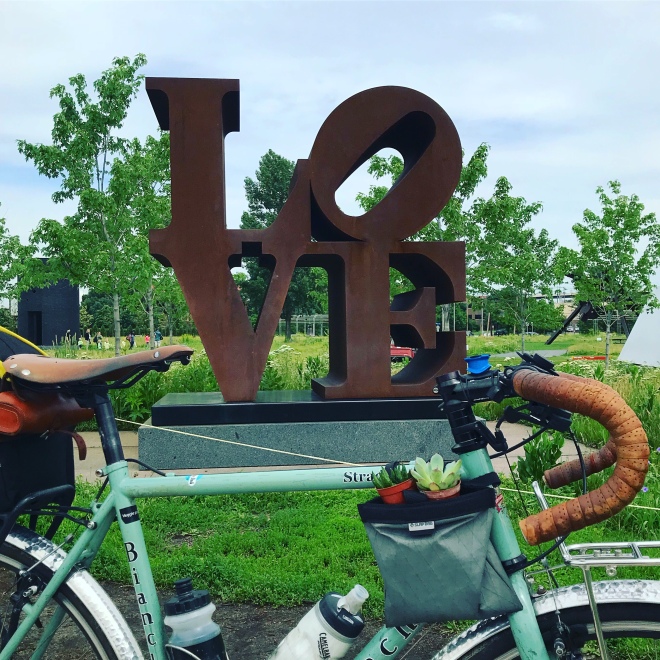 The sculpture garden was a nice stop in between marveling over the many bike highways in town. Seriously, there were so many trails I’ve already decided to come back for another visit. 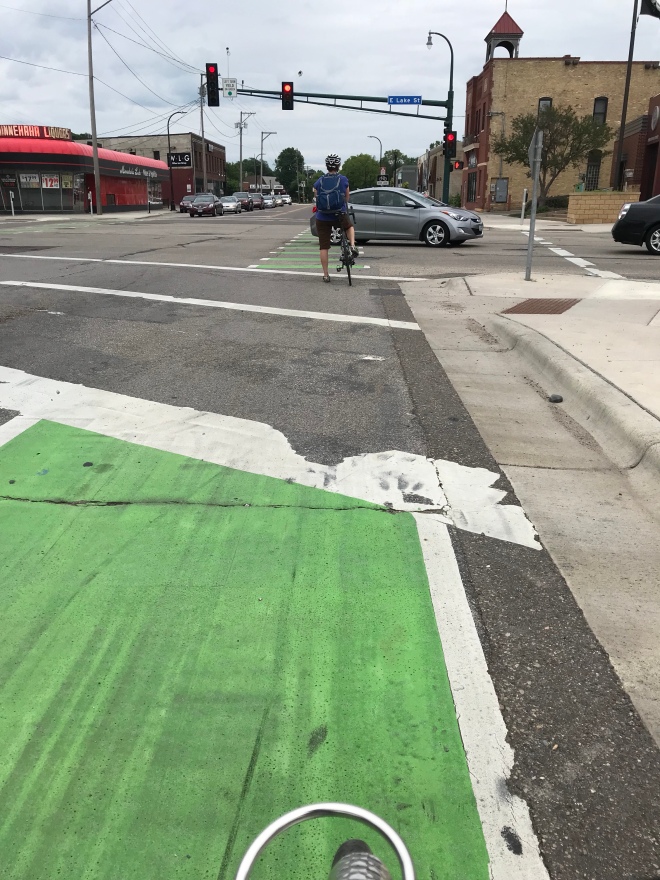 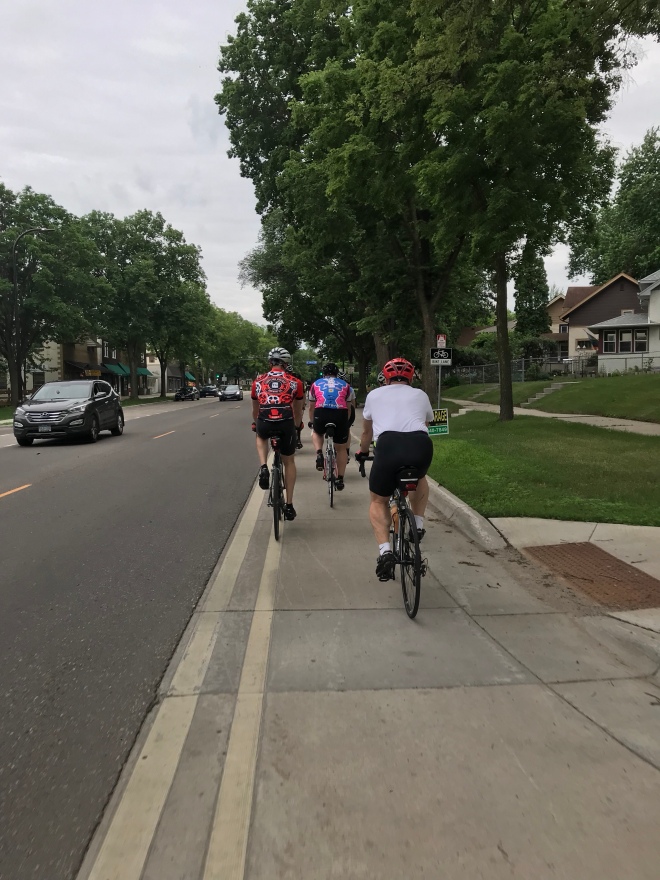 I took a ton of pictures to try to capture the magnificence of the infrastructure, but I failed. Where there weren’t separated trails (which seemed like everywhere), there is a minimum of a painted bike lane. It was at once inspiring and also somewhat demoralizing to see how far my hometown has yet to go to come anywhere near this level of infrastructure.

I retrieved my bags and crossed over the bridge to St Paul that afternoon to visit family friends for the night before heading out on my first real day of riding early the next morning. All together, I rode 100 miles in 1.5 days of exploring the city.. a pretty good illustration of what infrastructure can do for tourism and public health. 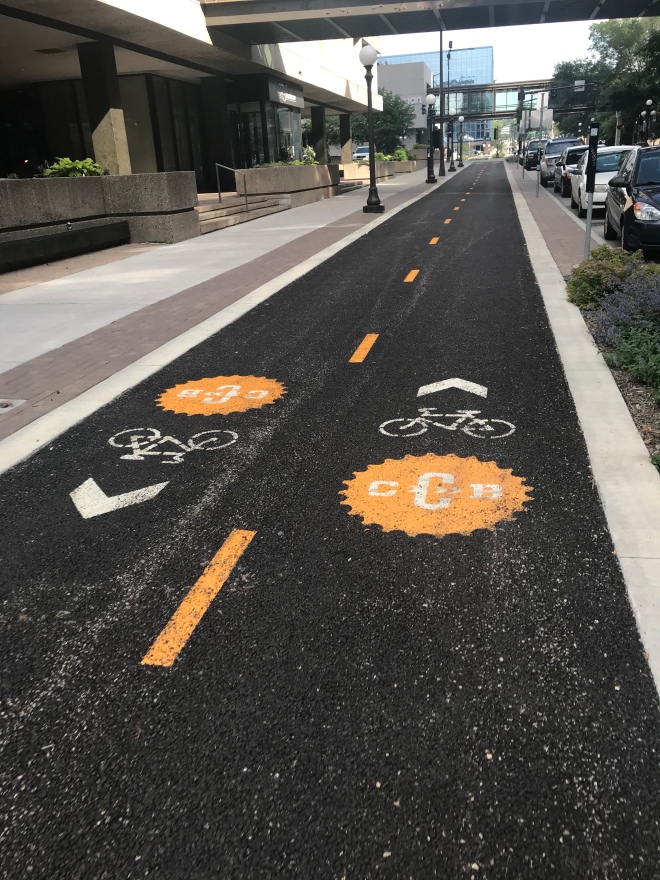 That’s where I’ll leave off for now, because I’m still processing how much I love the Midwest so far and deeply reconsidering my aversion to cold winter weather.

I didn’t stop to edit pictures or get every detail in because I didn’t want to put off posting until I didn’t post at all. Kind of like this trip in a way.. I didn’t wait until I had a fully formed plan, I just bought gear and plane tickets and jumped in. I guess if theres one thing I’ve learned in my 20s, it’s deciding to go with the flow and maintain a mantra of “Day One” instead of “one day”. Here’s to many more random adventures along the way.

3 thoughts on “Biking the Twin Cities”